Cuba is a country in the Caribbean, constituted by the island of Cuba, the island of Youth and more than 4000 smaller islands (Los Cayos). The country is divided into 15 provinces and a special municipality: the island of Youth. Cuba is bordered to the north by the Gulf of Mexico and the Atlantic Ocean, to the east by the Windward Passage, to the south by the Caribbean Sea and to the west by the Yucatan Strait. The country has officially been a communist state since the victory of the Revolution in 1959 until April 2019. From April 2018, the country is governed by Miguel Díaz Canel, president of Cuba. In April 2019, the Cuban constitution was renewed and a socialist state was named. In this new constitution, the right to health has been extended, in which the state now recognizes its responsibility for the protection of the elderly, the right on decent housing and the rights of all to public health, water and feeding.

Cuba has a total of 11,239,128 inhabitants, with a population density of 102.3 inhabitants per km 2 Three quarters of the Cuban population reside in urban areas. The only official language is Spanish.  The majority of the population professes the catholic religion and the rest belong to protestant denominations or practice traditional African-denominated cultures (e.g., Yoruba) or no religion.

Cuba has a subtropical climate, which means that it is warm and sunny throughout the year. There is a wet and a dry season, but it can also rain during the dry season. The rainy season lasts from May to October. In the Caribbean, most rain falls at the end of the day and in the early morning,.

In winter, especially in January, The lowest temperature is around 20 ºC. In the summer months July and August, the temperature easily exceeds 30 ºC. There isa temperature difference between the northwest and southeast of the island. In Havana in the northwest is generally a few degrees colderthan Santiago de Cuba in the southeast. Due to the hot and humid climate, the summer months may seem quite overwhelming, especially in the interior of the country and along the south coast.

In the hurricane season between June and mid-November, Cuba can be affected once or twice a year. The best months to travel to Cuba are from November to April. In these months it is the driest weather and the temperature is the most pleasant.

Cuba has beautiful beaches exactly as you can imagine the Caribbean beaches are. Soft sands, blue sea, palm trees and nice temperature. In Havana it is possible to take the bus to go to several beaches. For example, take the bus in the Central Park to go to the Playas del Este (eg Santa María Beach). The trip takes approximately 20 minutes. During the weekends entire Cuban families go to the beach. In other provinces further away  from Havana you can find famous beaches as for  example on the peninsula  of Cayo Coco. Here are mainly all-inclusive resorts and hotels for tourists. The Cubans who are here are mainly workers of these resorts. Las Coloradas Beach is on an island  near the mainland  of Cuba and there you can also practice water sports. Los Flamenco Beach is the quietest beach. Playa Larga and Playa Las Conchas are beautiful beaches where the water is not very deep, so you can take the sun or swim once in a while.

Varadero is one of the largest beach resorts in Cuba, where both Cubans and foreigners spend their vacations. In addition to the beach there are many nocturnal activities. There are many clean water beaches. There are hotels in all price ranges, u sually all inclusive with a swimming pool.

In Cayo Coco you can find one of the largest coral reefs in the world. Because of this people like to dive here. On the island of Juventud it is also possible to dive and see the coral reefs. In Varadero there are many points to dive.

The highest mountain in Cuba is in the Sierra Maestra and is called Turquino Peak. There you can make beautiful walks, but also in the cities there is much to see and explore. Keep in mind in Havana that the streets are very similar and there is almost no wifi to search the map on the phone 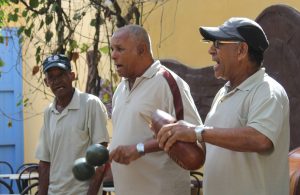 Everywhere in Cuba music is heard in the street. There is dance, both outside on the street and inside in restaurants and terraces. There are also places of dance to go at night, for example in Havana you have La casa de la musica (The house of music). If you want to travel along the island, you will find the best musicians and dancers of Cuba in Santiago de Cuba. Cuban music has many African influences and it can be experienced on multiple stages and on multiple occasions. La Casa de Trova in Santiago de Cuba is known for its great performances.

In addition to Havana there are beautiful cities to visit in Cuba. Viñales is a popular place to visit in Cuba, despite being a small town it is known for its tobacco plantations. There are good hotels and private homes.

Trinidad is perhaps the most beautiful city in Cuba. It has the UNESCO World Heritage status and is one of the best preserved colonial cities in the world. You can walk around the city, there are markets, museums and art galleries. There is also music everywhere and there are terraces to rest. In the center cars do not circulate which gives you the feeling that you are in the past. There are many private houses to stay in Trinidad.

Camaquey is also on the UNESCO World Heritage list. It is easy to get lost there in the winding streets that were deliberately built in colonial times to confuse pirates. There are beautiful churches to see and especially during the weekend it is good to go out.

Traveling by bus is easy to do and not very expensive, althought it can be difficult to reach the more remote places There are two bus companies in Cuba that travel between almost all major cities, Viazul and Astro. It is advisable to book tickets in advance.

Provides emergency medical attention 24 hours a day. External consultation in all specialties from Monday to Friday from 9.00 a.m. at 4.00 p.m.